I could hear the cry from just around the corner from where I was bouncing a mountain bike along a dusty track, trying not-very-hard in my first ever mountain bike race.

I had the natural reaction – an adrenaline surge, a swift unclip of my feet, bringing of knees to my ears, then a worried wonder about how I was going to get past the snake if my feet weren’t turning the pedals.

It had already been a less-than-ideal start to the event, the Orange Mountain Bike Club’s Ladies of the Lake, designed to introduce beginners to the sport. This race was part of my plan to try something new sports-wise in every locum place I work. The idea was to do as many laps of the course as possible within two hours.

Earlier that morning my friend Susy and I had driven two hours to get to Orange, arriving in plenty of time to do a reconnaissance lap. But somehow we were diverted from our beginners race course and ended up on the intermediate course . 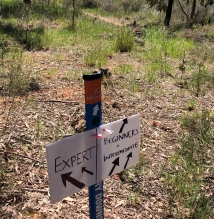 I have occasionally survived an intermediate course (in non-race conditions), but it has always involved foul language and the constant conviction that I am going to die. More often, it has involved becoming intimately connected with the ground, and subsequent bleeding.

This was the former kind of survival, so after a few ‘holy craps’, and a ‘does this hill ever end?’ we flew down to the start, just to hear the tail end of the race briefing.

And as I neared the voice shouting “snake’, I  wished I’d heard the entire briefing. Was there a protocol for snakes on the track? Get off and walk? Ride faster? Let a child pass you to deal with it?

I rounded the next corner and let out a sigh of relief. There by the track was one of the volunteers, holding out a packet of lolly snakes for riders to grab as they flew past.
Crisis averted. Now my main challenge was to get my feet clipped back in at the same time as taking a hand off the handlebars to grab a snake without hitting a rock and falling off.

The only kind of snake you want to see during a mountain bike race.

Thankfully, I managed it.

It was amazing how much energy one little snake could give you – physically and mentally.

However, the energy was mostly wasted. After our extended warm-up on the intermediate track, I’d gotten stuck behind the children taking part. So my first lap was very slow, and I’d lost the momentum to actually race.

I was really just meandering, and fighting a mental battle.  I spent the next several laps debating myself whether I should do four or five laps all up.  I knew I could do four laps easily. I could fit five in without trying too hard, but the mental demons were having their say. My knee hurts, my fanny hurts, I’ve got a gutful of dust. I’m too old for this. On  and on they went.

My real fear was that as I got more tired, I would misjudge an obstacle and come a cropper. With two knees constantly reminding me of my past two mishaps, I didn’t want another accident.

So I pulled up after four laps, reminding myself that my extended practice lap counted as one-and-a-half extra laps.

Susy however, was unstoppable. She just kept going, sucking down as many snakes as she could and pedaling like fury. She completed seven laps and won the beginners section. If you can’t be a winner, be a winner’s friend, I say.

But it turned out I  was a winner too. In the excitement of Susy getting her prize  of champagne and jar of honey, I vaguely heard the announcer was asking if anyone here was from Emu Plains.

Paying a bit more notice, I worked out they were giving prizes to those who had travelled the furthest to be there. Humph, I thought, (my hometown) Emu Park is further away than Emu Plains.

So when we worked out they did mean Emu Park, I also walked away a winner, with this lovely bottle of angry red wine. I am a bit afraid to open it though, given the blurb on the back. It’s mostly the bit about ebola which scares me, but hey, you only live once.

Thanks to the Orange Mountain Bike club for arranging this great event at Lake Canobolas. It was a blast.

NB: Thanks to Melissa for lending me her mountain bike for the race.

NBB: Vale Harry Hybrid, my trusty hybrid, who was stolen from outside a bar in Dubbo last Friday night. We have done thousands of kilometres together over the past seven years, and I’m so sorry I didn’t lock you up so a nasty little teenager couldn’t walk away with you.